The Housekeeper's friend, Ian who lives in Somerset came to stay last weekend because The Housekeeper, Mr Housekeeper and he were all off to Shepherds Bush Empire that night to see Big Country in concert.

Now Ian is a generous fellow, and, it has to be said, as very soft touch when it comes to the The Housekeeper's felines. He always leaves the bedroom door ajar and more often than not has a furry companion for the night to keep him warm, however ... this MAY be due to bribery of the food persuasion.

You see, some time ago, Ian came to stay and brought the Abyssinian's some supermarket brand chewy meat and fish stick snacks. The boys LOVE them and almost inhale them rather than eating them. Crystal is a little more demure and demands that hers are broken into pieces. Amber, as per all other treats, just isn't bothered.

It has got to the point where the boys now know Ian's voice when he arrives and don't let him through the front door into the house unless he has been corralled and full bag inspection has been completed for contraband.

You think The Housekeeper is exaggerating, right !!!! 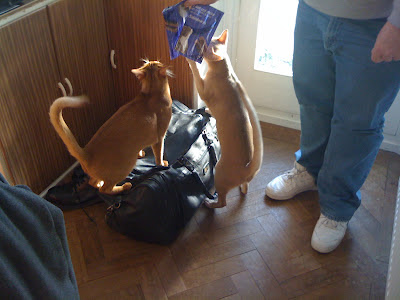 Bag opened for inspection of goods to commence 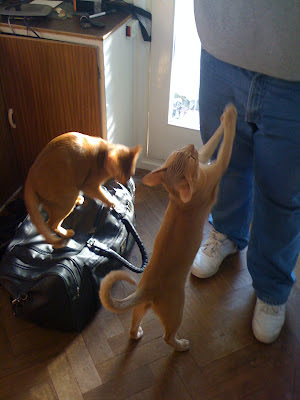 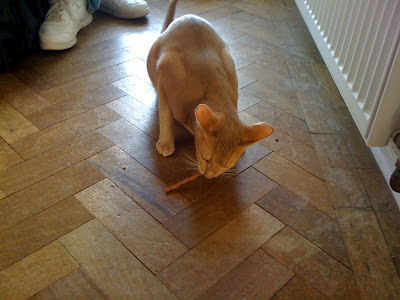 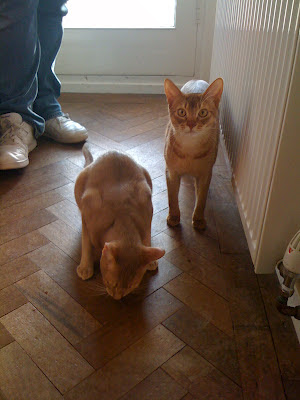 What do you mean, the rest have to be saved for another day?
Go on then, he's passed the inspection. You can make him a coffee
Posted by The Housekeeper at 10:10:00

Email ThisBlogThis!Share to TwitterShare to FacebookShare to Pinterest
Labels: Dino, Jasper, The Housekeeper