The Housekeeper has been mopping up! 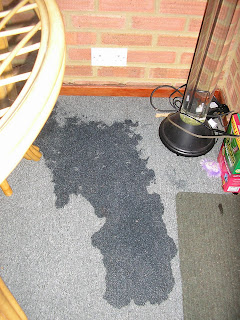 She doesn't know who is to blame for this misdemeanour, however in hindsight it's a miracle that it hasn't happened sooner.....

The source of the water which is now creeping across the conservatory floor, is the bubble tube which you can see in the corner of the room. It has an electric pump which blasts bubbles up through the tube through a film of different coloured lights giving an ambient effect in the room at dusk - or - IT DID!

The Housekeeper was very, very confused for a few minutes as to why there was SO much water everywhere, but the tube was still upright and hadn't been knocked over. It was only when she started mopping up and was moving things that she realised what had happened.

Someone has chewed holes in the plastic pipe which runs from the bubble tube to the pump.

With sarcastic THANKS to The Katnip Lounge who suggested in a comment yesterday, that the Four Abyssinians should stage a purrotest due to both Housekeeper's going AWOL over the last few days.
Posted by The Housekeeper at 21:29:00