How to De-Junk your Life

The Housekeeper remembers a television programme some years ago called How to De-Junk Your Life. Dealing with Clutter. How to De-Junk Your Home. It gave radical, but sensible ideas on how to gut a room, sort out the essential from the sentimental and to let go of the junk.

A dejunking expert is not required at The Housekeepers. She has four mini whirlwinds who are willing to indiscriminately select possessions of The Housekeeper's which they feel she should no longer have to dust.

The Housekeeper suspects that a fly may have been to blame for the mayhem which was caused at lunchtime today. She heard the crash - and knew it spelled trouble. It is, however, VERY worrying in hindsight that when faced with a room of broken glass, three absent felines and the fourth leaving the scene of the crime that the first thought was to where the camera was for evidence. The Housekeeper is pleased to report that there were no trails of blood to be seen and all sixteen paws were checked for signs of cuts as soon as the broken glass had been picked and hoovered up.

So: The bell tolls today for;

1) The large blue goblet vase which stood on the conservatory table. It was destroyed by a low flying empty wine bottle (which survived). Purchased for just £5 at a car boot sale on a warm sunny day, not unlike today by The Housekeeper, out on a mission with her mate Ian, when they were on the hunt for props for a show.

2) A goldfish bowl shaped lantern which took a candle or tea light.

4) A square lantern with painted glass

Fortunately the glass top table in the conservatory survived. Just. 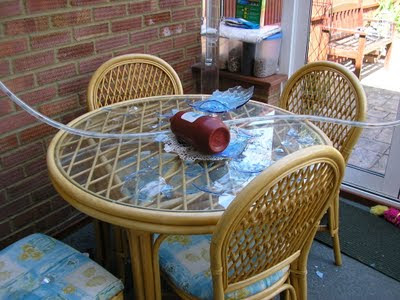 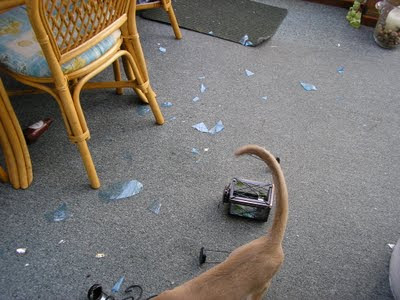