We have been burgled.

Mystery surrounds the sudden disappearance of a number of tails belonging to the resident toy rodents in the household.

A spokesperson for the property confirmed in a statement this morning that no less than 7 small white and grey fur mice, had indeed been spotted without their tails. The crime is suspected to have occured within the last 2-3 weeks but has only just been discovered. The victims also confirmed that a further 5 of their comrades also appear to be missing, assumed lost, under the settee or dining room cabinet.

The victims did agree to be photographed but all wished to remain anonymouse! 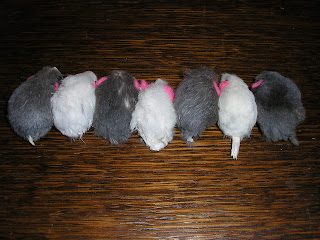 Neither small Fawn or Sorrel Abyssinian suspect was available for comment.
Posted by The Housekeeper at 12:26:00