The Housekeeper couldn't possibly complete cat profiles for all the other Abyssinians in her life, without remembering her first Aby and soulmate. He was an unusual character, to say the least - but was dearly loved for the all too short time that he was with us. We will tell his full story some other time! 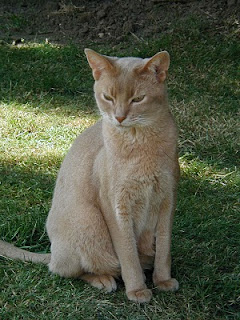 NATURE
Parsnip had a very unusual temperament with a very short fuse. he did not appear to have the usual Abyssinian traits. He didn't like humans much but tolerated them until he had enough.

Fastidiously clean. If he was allowed out in the garden, he would come into the house to use his litter tray and then go back out to play.

CUDDLY
Human - On his terms, at night, lying on The Housekeeper's chest, on top of the duvet, or when The Housekeeper was ill in bed.Not a lap cat. He only sat on a lap twice in the time that we owned him

Cat - Parsnip hated other cats. He used to tell them in no uncertain terms that he hated them by growling at them

VOCAL
Mew - Fairly loud
Purr - When he set his mind to it, but not often
Cry - A throaty "yowl" and a growl that a dog would be proud of!

PLACE (DAYTIME)
Under the Ceanothus bush at the bottom of the garden, in the shade. Parsnip was allowed out in the garden as he didn't wander far 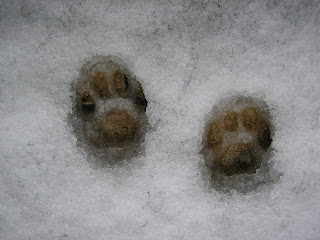