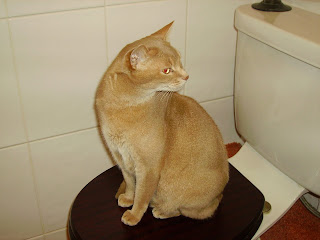 The Housekeeper despairs of the Four Abyssinians sometimes. She spent a good 15 to 20 minutes yesterday morning clearing out the litter trays, cleaning them, putting new litter in (we use a clumping clay litter) and sweeping the floor of the outhouse where the trays are.

This morning, there's litter all over the floor again.

It seems to be that there is a fine line between not enough litter in the tray which leads to a gooey sticky mess and and extra cleaning of the trays themselves, whereas a deeper tray of litter means that the deposits are far easier to scoop but the surrounding areas to the trays are awash with litter where the cats have been digging for Australia!

The Housekeeper is very, very happy with the litter that she uses, as are the cats, but it's SO messy!

If The Housekeeper's had more than one toilet in the house, they might have considered a litter-quitter, but it just doesn't seem like the right thing to do when their are visitors coming to stay and having to have to remember to leave the bathroom door open at all times and the loo seat up!!!!!! 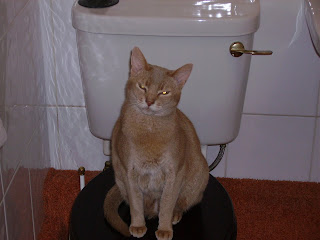 What's a birthday without the opportunity to have a scrap with your own brother! 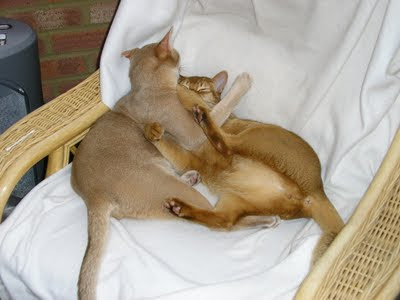 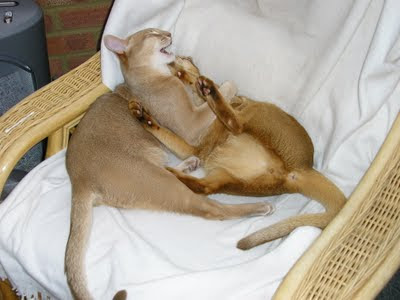 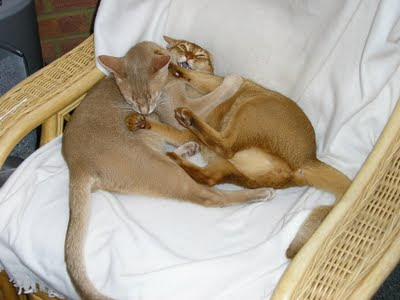 What the heck is that smell - have you got cheesy feet? 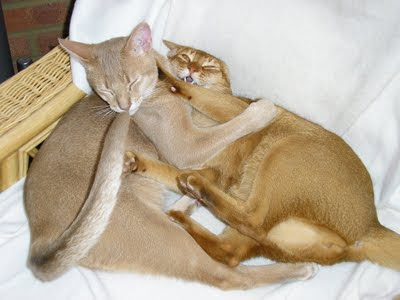 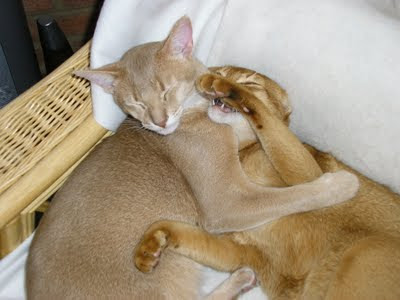 Mind if I play with your whiskers? 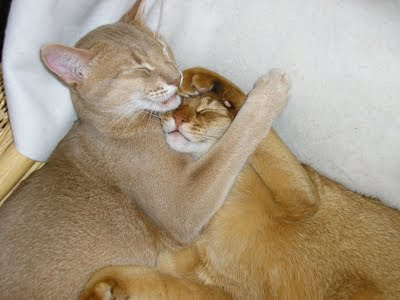 Just keep your paw to yourself 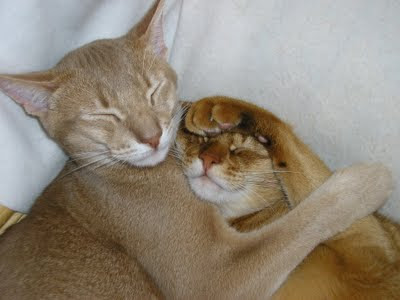 And give your brother a cuddle! 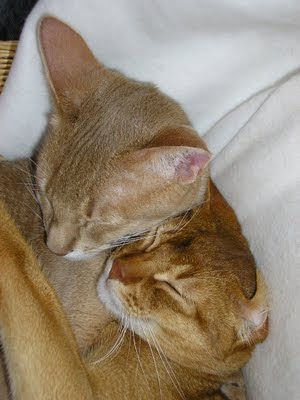 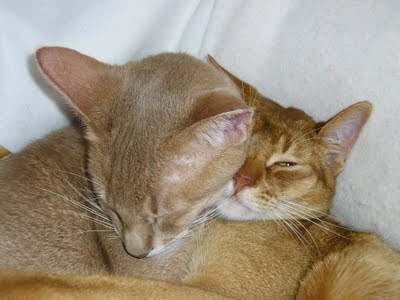 How many damm pictures is she going to take of us fighting? 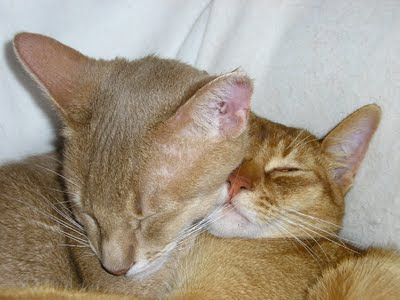 All this fighting has worn me out 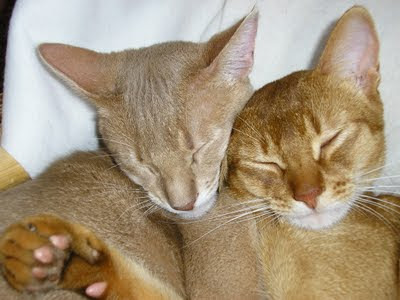 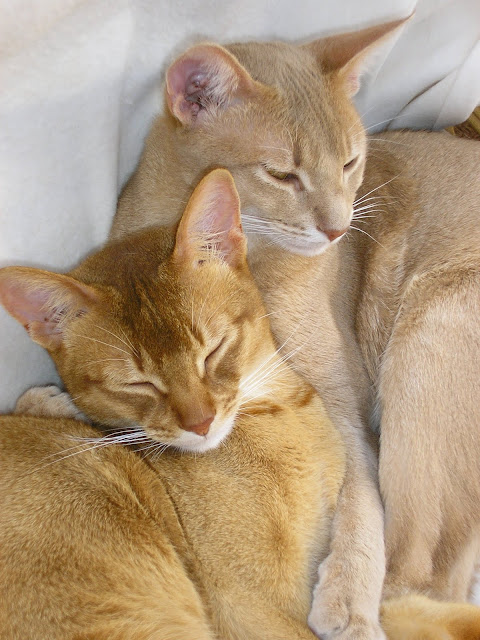 Happy Birthday also to both usual brother Leon in Wales and sorrel sister Daisy in France!
Posted by The Housekeeper at 00:07:00 4 comments:

There's approximately ...... 3 beds, 5 comfy chairs, 10 dining chairs, 2 fleece throws and 2 cat beds in The Housekeeper's house, as well as numerous other soft comfy spots around the house of which an Abyssinian could choose to sleep...

So where does Jasper choose? An plastic storage crate, laid on its end ........ 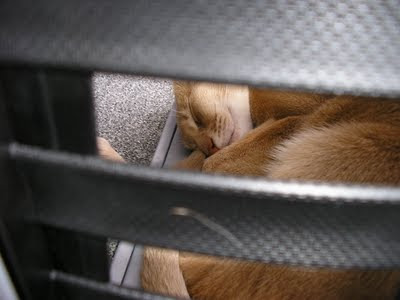 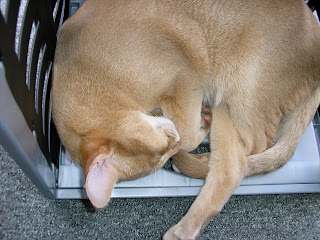 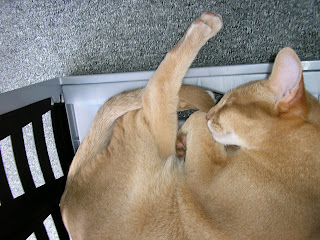 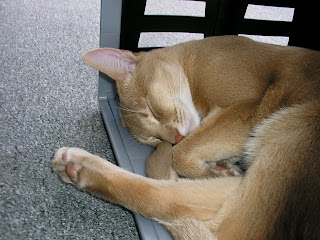 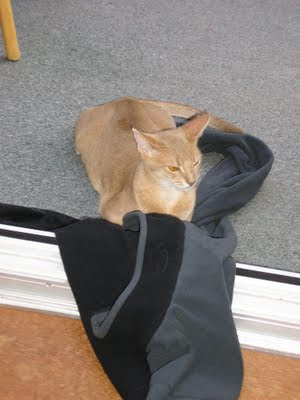 "Do you think anyone will notice if I just drag this fleece off the clothes airer and put it in the crate"?
Posted by The Housekeeper at 14:35:00 4 comments: 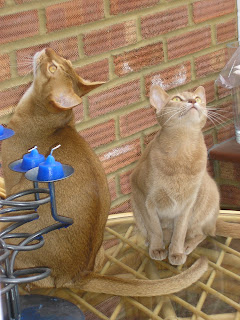 All angles covered - by Dino and Crystal 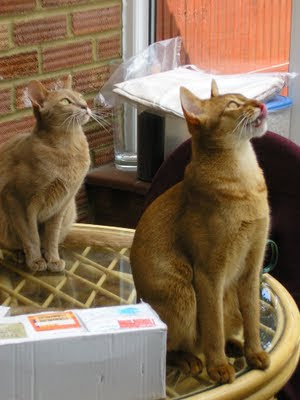 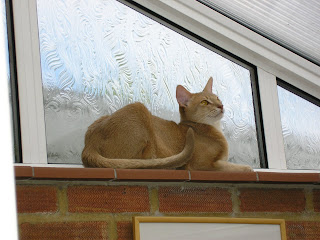 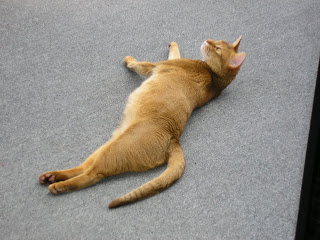 Having just been involved in a Eurovision Song Contest style show, The Housekeeper, as well as washing all the costumes, brought home a bag of bunting and flags from the walls of the hall and front of house so that she could store them all flat rather than in a big tangled bundle.

Help was at hand on Saturday morning from the Four Abyssinians to ensure that it was done right. 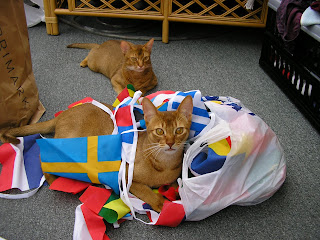 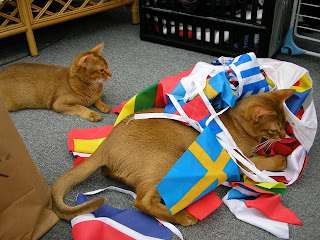 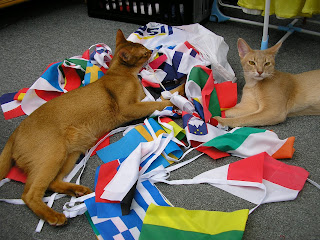 We are SO embarrassed, but The Katnip Lounge did ask, so here she is .... The less purred, the better. 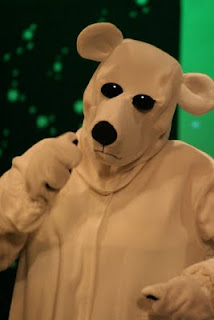 The Four Abyssinians, on the other paw, have had an interesting day with no less than two different Hotpoint engineers visiting to fix both the cooker and the washing machine. The former is awaiting a new thermostat and Mr Hotpoint 1, will be back next Tuesday. The later has been condemned as terminal by Mr Hotpoint 2. We assume that this is due to the financial constraints and 2 hours needed to change the drum as the bearings have gone and not JUST because Jasper tried to trip him up? Oops!

The Housekeeper has been out this evening staring at different models of washing machines, trying to make her mind up on which one to buy. This also means that we are sharing the conservatory with the remains of the show costumes that didn't make it through the washing machine before it waved the white flag.

So now its back to the daily grind for The Housekeeper in the workshop which means more cuddle and play time for us and more blog time for you!

The four are not coping well with the excessive heat at the moment and are looking very sorry for themselves at the moment. They have even dared to sit near the conservatory fan in an effort to keep cool.
Desert cats indeed !!!!
Posted by The Housekeeper at 21:01:00 3 comments: