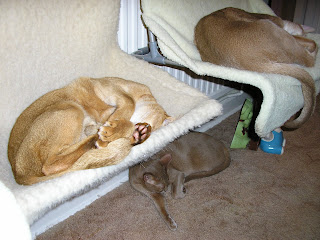 Anyone would thing these dark November mornings and evenings were for nothing but snoozing ..

If you had seen The Housekeeper and Jasper curled up in a throw on the settee at 18:00 yesterday, then you have had to agree!

If you had seen The Housekeeper in bed this morning with AMBER under the bedclothes having a proper cuddle, you would have definitely agreed!!! 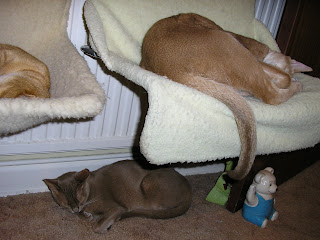 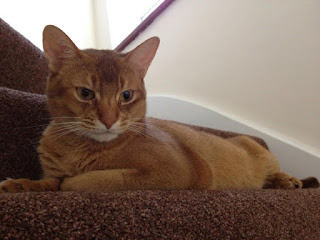 Happy Birthday to the vunerable, delicate yet cheeky bundle known as "Little Legs"

She may cause untold heartache when her skin has errupted and she is in a sorry state with her plastic collar on but there is no better sound in the house than when "Squelch" brings yet another of her moppy toys and leaves it either at The Housekeeper's feet when she is working or, when The Housekeeper wakes up to find that Amber has spent the night moving all her "moppy babies" and leaving them next to The Housekeeper where she sleeps. 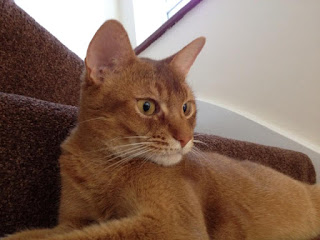 I've just re-read my "booster post" for the boys from last year and too be fair, I could have almost copied it, word for word!

The Housekeeper took Jasper and Dino to the vets this morning for their annual boosters....

Boys boys were fine getting into their boxes. No subterfuge, closing doors hours in advance and running round the house like a lunatic as The Housekeeper has to with the wylie fox cub that is Amber Brown!

Jasper emitted his first ear-piercing cry as the car engine started up and managed to sustain the same note until the end of the road. Quite something! Dino wasn't much happier!

Jasper was first to be weighed, checked and vaccinated and cried in The Housekeepers arms like a baby with his heart going ten to the dozen. In the words of Mr P, the vet. "He's a bit solid, isn't he"! (Told you I could have copied the post!)

Dino was second. he decided the best ploy to the impending scales doom was to sit with one paw randomly out of the scales at all times, however he was placed.  This made the vet laugh a lot!

Both boys weighing in at around 5.4kg, both very healthy and as Mr P said "There isn't much wrong with either of them, is there! Beautiful coats"

The vet does however think that they are both marginally overweight so there will definitely be a limiting and weighing of the crunchies from now on to help both them and Amber, who has gained some weight from her regular steroid jabs. The only one who will miss out a little is Crystal who is such a waif. More ball games up the stairs too, for the boys, to wear them out!

Jasper obviously felt that it was a bit of an ordeal as he was shaking at lunchtime, sitting on the chair next to The Housekeeper. The Housekeeper just found two trips to the vets in one week an ordeal on her purse but they are definitely all worth every penny!!

It's that time again. Two trips this coming week.....

Amber went to the vet this afternoon for her steroid jab. She managed to last 9 weeks this time before her little tummy errupted into a red horrid mess. I say little... For a cat who is known as "Little Legs" she is apparently "chunky" and should maybe be on a diet or getting more exercise.

CHUNKY??? Heaven help The Housekeeper when they clap eyes on Dino on Wednesday then, as he and Jasper go for their boosters and health checks.

Dino is currently still in the cat house for breaking The Housekeeper's favourite tea mug on Saturday.

The Housekeeper is currently in mourning, not only for her tea mug but also her bank balance after a hefty service and MOT on the car and vet bills for three cats within three days.

It may be Beans OR Toast by Friday
Posted by The Housekeeper at 21:47:00 3 comments: