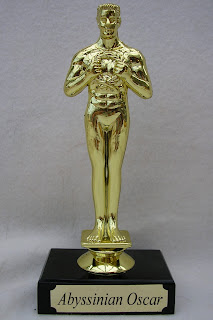 ﻿
The Housekeeper went to a theatre group anniversary bash on Saturday evening and came away with the award for "Best Female in Panto" for her portrayal of King Rat in Dick Whittington in 2006. It's good to be bad! It is an especially memorable show for The Housekeeper as she managed to break her wrist on stage, at the beginning of the second week of performances, sword fighting with Dick Whittington!

Her Oscar award has got The Housekeeper's brain cells working and with a bit of help from Photoshop, she is now going to award one of The Four Abyssinians with an Oscar each week for the bestest, worstest, funnyest, awfulest thing that happens ........

Nominations will be stored via draft Oscar blog entry and the winner will be published each week!

We look forward to Amber's acceptance speech. She doesn't talk much! Jasper may go on a bit!
Posted by The Housekeeper at 21:19:00