The Impossible we can do now. Miracles take a little longer!

The boys and girls now regularly play together after breakfast and spend the mornings running at full steam around the whole house, leaving no prisioners. However when it comes to sleeping everyone tends to sleep alone, with the exception of the boys who always curl up together, either in their fleece bed or a radiator hammock.

Yesterday evening, The Housekeeper finished a phone call and turned around to see three cats sharing the two radiator hammocks in the dining room. Nothing new there - until closer inspection revealed that it wasn't Jasper and Dino curled up together for a cuddle, but AMBER and Jasper. This is the very first time that we have seen any sort of real affection between the girls and the kittens, which made it all the more special. 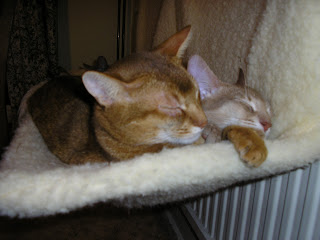 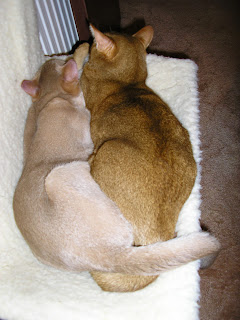 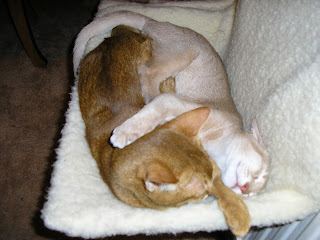 As if not to be outdone, approx. two hours later, The Housekeepers found that Dino had decided that it was his turn for a cuddle with Amber too! 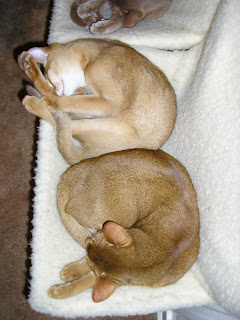 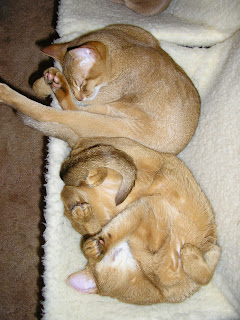 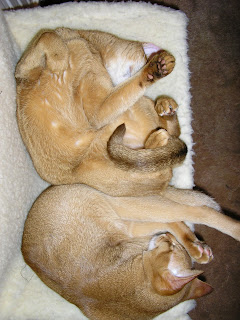 This is just the best possible outcome of integrating the kittens into the household that either of The Housekeepers could have hoped for. One things for sure. They are not all going to fit into the same hammocks for much longer, at the rate that the boys are growing!!!!
Posted by The Housekeeper at 17:11:00