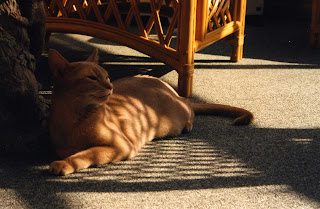 Raving Parsnip Purrikiss was The Housekeeper's first Abyssinian. He was born on 2nd October 1998 and came to live with The Housekeepers when he was almost 10 months old in August 1999. We were introduced to his breeders through a mutual contact, having been told that they had a Fawn Abyssinian who needed to be in an "only cat" environment.

We went to visit. He hid under the furniture (hence why no one else had bought him) cowered and hissed. A LOT. Everything you should avoid when choosing a cat! The breeders had given up on him finding a home and had decided to build him a garden run to live in as a last resort. His saving grace was that he loved to play and when given the opportinuty, when no one was watching, played with a screwed up post-it note on the wooden floor. 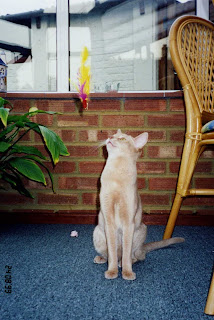 A week later, we took him home, with the option to take him back any time within the first year, if things didn't work out. For the first three days we had him, we barely even saw him. We heard him feed at night after we had gone to bed, but by day he hid under the beds and the furniture. After a week of coaxing, he would come out to play with "Feather on a Stick", "The Dr Who Scarf" and the post-it notes but would retreat to one of the dining rom chairs under the table and peer at us through the holes in the table cloth. 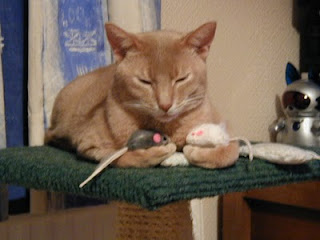 Once we had gained his confidence to play, we also started picking him up and putting him straight down, once a day, leading on to picking him up and counting to two and putting him down etc etc etc until we were in a position, about a year later, that we could hold him for long enough for him to accept being stroked. He became, in time, the most affectionate cat  - however it was always on his terms and he only ever sat on a lap twice in his entire life. At bedtime, he would wait until the lights were out, do a full check of every room in the house, and then settle between The Housekeepers where he would purr for England and accept a stroke or two, before settling on their feet for the night. 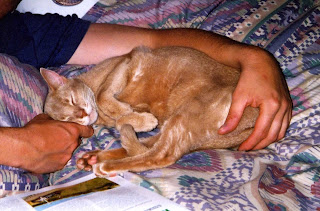 If The Housekeeper was ever ill in bed, he wouldn't ever leave her side. If she went downstairs to make a drink, he followed her. If she went to the bathroom, he did the same and then returned to his watch post on the end of the bed with his head on his paws, much like a puppy. He really was a true companion. 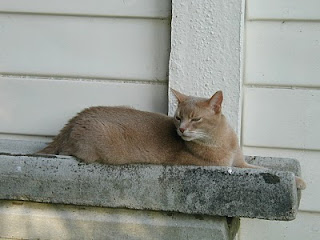 He is the only Abyssinian we have let out, because he showed no desire to hunt or stray and used to sit happily in the back garden. If he wanted to know where his humans were - he would walk into the house, chirp to get us to answer him, come for a headbutt and then set off again for another laze in the sun. After he had used his litter tray!!!! He never ever used the garden as a toilet but came in to use his loo and then went back out to play !!!!!!!! The only garden presents we ever had were huge moths, which he would deliver proudly at our feet and then devour, and the odd frog. He never killed a bird, for which we are grateful. 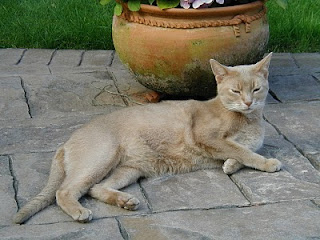 The one aspect of Parsnip's personality that The Housekeepers never managed to control throughout all this time, was Parsnip's temper. He growlled like a dog. He hated visitors and would bite ankles and go for hands left in the way. He would sit outside the bathroom door and hiss at anyone who dared go up to use it. Whilst this was somewhat amusing to start off with, having to tell anyone who walked into the house NOT to touch the cat, or put their hands down to him was difficult, because he looked so, so beautiful but friends often went away with a war wound on a hand or ankle.

Parsnip left us far, far too soon on 11th September 2008, just short of his 10th birthday. We had taken him to the vets because he had started walking with his head to one side and was following the lines of the furniture and walls to move from room to room. He had antibiotics for an ear infection, which did no good, followed by a blood test which was sent to Germany for possible Toxoplasmosis, which proved negative. 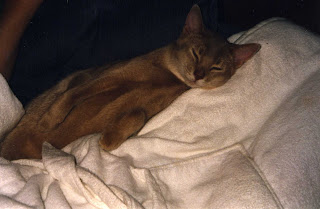 Each day we watched our beautiful boy get sicker and sicker and the vets had absolutely no clue as to what was actually wrong with him. They eventually suggested that we take him to an animal hospital approx 20 miles away where they were expecting a mobile MRI scan unit that evening and they booked him in to have a full head and body scan.

The results were devestating. Parsnip had a minor deformity in the structure of his nasal cavity. Whilst this had not previously affected him, other than the production of some quite disgusting snot! over theyears, the deformity had accumulated scar tissue and this scar tissue was now pressing on his brain and had pushed his brain backwards and brain damaged him.

Looking back, its no wonder that he was such a grumpy cat with such a short temper and fuse. He had probably had a headache for much of his adult life and we suspect that is why, on the odd occasion that he had to be scruffed by the neck, he always screamed. When he had swiped us with his paws whilst we were stroking him, he would look at us as if to say "Why did I just do that?" - and now we knew exactly why. 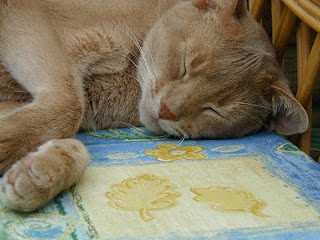 Parsnip was the most loyal and fun companion and we have so many precious memories and funny stories that we could write a book about him, let alone a blog entry and we will share some more of his pictures some other time.

He would have absolutely loved The Housekeeper working from home, as she does now. We can imagine him pottering around the garden and putting his nose around the stable door of the workshop where she spends her days, looking pleased with himself with his latest catch in his mouth and THAT chirp.

Even with our four current Abyssinian charges, we still miss him.
Posted by The Housekeeper at 08:33:00