Otherwise titled "Who killed the flamingo in the conservatory?"

The Housekeeper has just returned to the house from the workshop after 2 hours of packing to find shredded cerise pink marabou feather EVERYWHERE.

I should explain ..... The Housekeeper is also a Wardrobe Mistress and the conservatory currently houses the costumes from the entire cast of a pantomime, waiting to be washed, in black bin bags. Amongst the costumes was a bin bag containing a pink dressing gown which was edged in thick marabou boa, referred to in the script by the dame as her "negligence".

Considering the volume of pink feather now strewn across the floor its a wonder that the negligence doesn't look like it has been touched (a good job as it is being borrowed tomorrow!) Also, consider that The Housekeeper sits in the workshop in full view of the conservatory and didn't see any of the above happen.

Now we just have the feathers of a dead animal strewn across the whole of the floor and four Abyssinians, all with different expressions on their faces. The kittens are sat on the settee in the conservatory dozing. Amber is sat on the scratching post in the conservatory with a puzzled look on her face of "what the hell happened here" and Crystal has the innocent, look of a cat who has been in the workshop with The Housekeeper all morning and "didn't do it so you can't blame me". 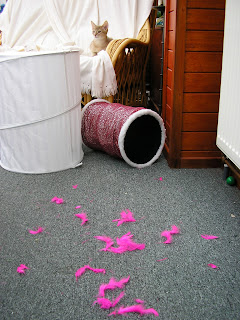 Email ThisBlogThis!Share to TwitterShare to FacebookShare to Pinterest
Labels: Costumes, Misdemeanours, The Housekeeper