oo*yhuuuuuuuucv (said Jasper, as he leapt from the filing box onto the keyboard)

Poor Amber. It's been a bad few days really. Not only is she still suffering from the upheaval from the invasion of the two mini-me's, Amber has a skin condition which can be very nasty but having had a steroid injection on 2nd October, had been under control and the affected area had grown fur and she starting to look very beautiful. Unfortunately, we noticed last night that a patch which had started to reappear in the crease of her mouth had spread, so I rang the vets and got her an appointment for a repeat steroid injection. The vet reckons it could just be the stress of the last few days which has brought it on again - so we shall see in due course.

As I had to go anyway, I also decided to take the boys to be registered and get their microchips done. They were impeccably behaved. THEY played cute in the basket and at the vets and didn't make a sound.

Amber charged round the house crying before she had even seen her box and resorted to hiding behind the freezer in the outhouse. Having been extricated, she did at least stay quiet in the car (first time ever!) but by the time we were at the vets her ears were trembling and she was in a right state. I got her back into the house first and she sat quietly in the kitchen, waiting for some crunchies.

Jasper, however, decided on his return to the house to do a lap of honour at full speed and full voice and in the process frightened Ams who, in an attempt to escape Jasper and his war cry, ran through her cat flap into the outhouse. What she didn't bargain for was Jasper - following her at full speed straight through the cat flap, still yelling! It took him a couple of attempts to work out how to get back through the cat flap on his own without help, but it didn't take long.

Amber then went and settled in her hammock in the dining room, out of kitten reach, that was until the terrible twosome bounced into the one next to her and tried to cuddle up! With a look of sheer disgust, Ams took to the bedroom cabinet and the clean pile of washing, made a nest and has been there all day!

The kittens have obviously decided that the radiator hammocks are a good place to sleep and are now both curled up in the same one, snoozing. 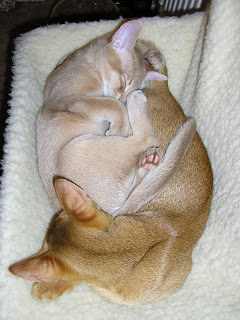