After a 3 hour journey, we arrived to pick up the boys. Dino slept whilst we were there and Rosie his Mum made sure that he had a good wash before he left for his new home. 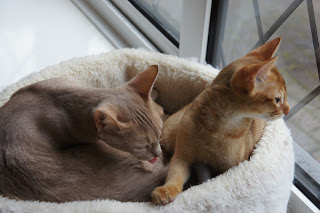 An hour later and we were on our way home with two QUIET? Abyssinians in the car.

It took Dino about half and hour to find his voice and he yelled periodically to ensure someone was still in the car, whilst Jasper slept most of the way home, as did I - full of cold. We arrived home at approx. 4:30pm.

4:35pm - Crystal strode into the lounge, took one look at the full cat carrier and hissed. Dino growled back from inside the box!  Crystal removed from the lounge! Dino straight out of carrier. Completed several laps of the lounge. Jasper still in his cat carrier, buried inside the fleece!

4:45pm - Dino has decided that the brown feather boa is the best toy ever and is laying on his back with it in his paws. Jasper is still in the cat carrier. 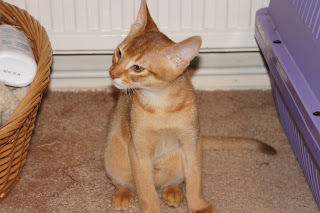 5:00pm - Jasper has finally made an appearance, with a very foxy tail and fur standing up on his back. Having surveyed the lounge from the arm of the sofa, he's now hiding behind the sofa!

5:30pm - Dino and Jasper are now sharing the brown feather boa. Dino striding around, Jasper a little hesitant. Jasper and Amber have met briefly thanks to Ambers ability to get through an almost closed door. A little hissing from Jasper and Amber runs away. Crystal is growling from outside the lounge door.

6:15pm - Dino has found the food and tucked in. Jasper doesn't seem very bothered about anything other than the brown feather boa!

We are now taking it in turns to be in the dining room with the girls - I am currently blogging and printing packing slips for work with help from Crystal whilst Keith supervises the boys. 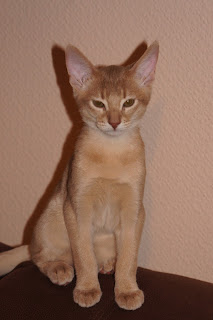 11:45pm- The running finally stopped. Dino flaked one one settee whilst Jasper curled up behind my legs as I snoozed on the other settee. Managed to scoop him up and have a cuddle with him in my arms as he fell asleep. Moved them both to their fleece bed and left them to sleep at approx. midnight.
Posted by The Housekeeper at 23:56:00